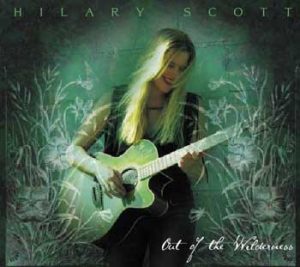 “Out of the Wilderness” is an enhanced EP that takes Hilary Scott’s artistry to new heights, showcasing her talents with some of Nashville’s finest studio musicians.

In 2004, Hilary began working with Nashville producer Matthew Wilder to help carry her songs into the radio realm, releasing an EP entitled, ‘Out of the Wilderness.’ These songs have been well-received by both fans and radio. John Kulidas of WCSU (Chicago State University) says: “Hilary’s in our rotation and we’re definitely looking at her as an up-and-comer. Just the other day one of my colleagues was asking me, ‘where are all the Carol Kings nowadays’? Well….here you go!”

“…Her voice is very strong and powerful. It communicates so much in and of itself. I see artists all the time, some with potential, some without. I just knew Hilary has the proverbial ‘IT’.”   -Billy Burns, former drummer for Ray Charles

In addition to this CDs superb audio tracks, it also contains a delightful enhancement that includes the artist’s bio, a photo gallery, and two engaging videos of the artist discussing her music and performing live at See Sound Lounge, Seattle. The videos were produced by Global Griot Productions, Inc., Seattle, WA.  Beyond Hilary’s intelligent and insightful lyricism, Hilary’s vocal range is captured beautifully on this disc, as well as her stylistic diversity, with elements of rock, folk, pop, country and blues represented in ear-catching form on this fantastic professional recording!  Hilary has since continued to collaborate with Wilder, signing a co-writing/publishing deal with him in 2006 and having the opportunity to write with Nashville royalty such as John Goodwin and Angela Kaset. This project gave birth to songs that dip into techno, dance and pop genres. Look for these to be released sometime in 2007.

“I have Hilary’s CD on right now….My goodness what a powerful voice she has! Her songs are SO GREAT! I sometimes think Brave New World is my favorite, but I also LOVE People On a Train”  -A California fan

“…I had the great pleasure of finally seeing the lovely Hilary Scott and her band in performance at The Elbo Room in Chicago…(it was) an awesome show to see and hear. Grab some of their CDs, tell your local radio stations to play their music, tell your friends about them, buy their CDs to give as presents, and promote the hell outta this band! ” (Show review can be read in its entirety on the Yahoo Fan Group website)  -Ray from Texas

“Last Friday I saw the Kansas City debut of a great new band that I think we’ll be hearing a lot about for years to come…it’s the Hilary Scott band out of Columbia, MO. The music is simply great. Very fresh, tight and exciting…they’re not trying to sound like anyone else. They certainly rock, but very articulately. Lots of blues and jazz influences, but they truly jam, too…when performing she (Hilary) demands your attention. You simply can’t take your eyes off her. Great voice (and easy on the eyes) and a nice guitar/violin player. Check them out online and go see them live if they every come to your area.”  -BOB from Kansas City

“As said, she’s independent…as they come! She’s like a mix of Ani DiFranco (…she does a killer rendition of ‘Both Hands’), Sarah MacLachlan, India Arie, Billie Holiday…but break it down and she’s just Hilary. She’s amazing, the kind of artist that can take a crowded bar into the palm of her hand. Clicking beer glasses and loud, boisterous jackasses, they’ll listen to her if she plays…”  -Rebekah from Portland, OR

“It’s EXCELLENT! I was diggin’ it this morning in the car.” Dave Cohen, WORT 89.9, Madison, Wisconsin

Tracklist:  (all songs by Hilary Scott)