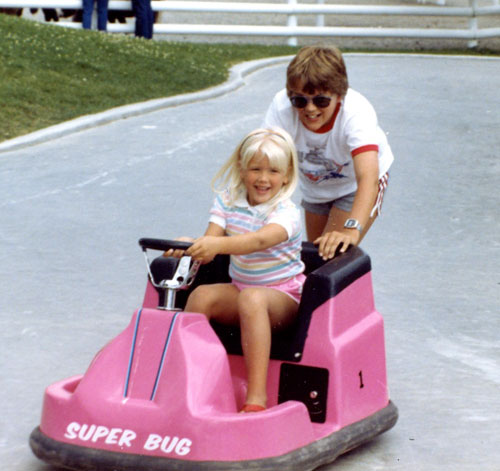 My name is not really Hilary Scott. I thought that might catch your attention. You see, back in 1998, my older brother Scott died of complications due to epilepsy. It was the most devastating thing to happen in my life to date. Scott (and also my sister, Heather) shaped a huge part of my involvement in, and appreciation of, music. It was part of his everyday life, as it was for my entire family, and Scott introduced me to the more “rebellious” side of music, which I think ultimately helped lead to my desire to create my own songs. When Scott died 16 years ago, I adopted his first name as my performance name, because then he would  be with me, and my music, wherever we went. It was the best personal tribute I could think of.

I had no idea that around 2005 or so, when I had already been Hilary Scott for 7 years, had a web presence, and a large Midwest following, and was gaining exposure everywhere with 4 or 5 albums to my name…that Hillary Scott with “2 L’s” would start cropping up in a soon-to-be quite popular country group called Lady Antebellum. I had no idea people would ever confuse us, but eh…it happens. Our music and styles are completely different, but whether the public and/or industry’s confusion over the “two Hilary Scotts” has ultimately been a help or a hindrance to my career, is quite frankly, irrelevant. Because my name was chosen to honor someone I love nearly two decades ago.

The path my music has led me on has been winding and hilly and always exciting. Europe and Asia and the UK and the US, songwriting competition wins, opening for some amazing legends like Tanya Tucker, Chuck Berry and Little Feat, developing a fan base of some of the most wonderful and loyal listeners ever…these are a few highlights so far.

And now…what now? Being the “indie” Hilary Scott has been costly. It has been a labor of love and has often meant sacrificing other things people take for granted. But this is not a complaint-far from it! With the help of my independent label, Belltown Records, some amazing musicians that have propelled me, challenged me, and inspired me, family and friends and fans that give me the energy to carry on…I have done SO much without millions of dollars and a major label. And now this “team” behind me has increased the monetary investment with a re grammy-winning players. You cannot just make a record and expect it to move mountains. The independent artist has to push the sometimes seemingly immovable mountain by getting press, reviews, radio play, tours, sales…and that all takes money.

I sincerely tell you I have never taken your belief in me for granted. Every face at every show is like a small miracle to me. Every time someone tells me how much a song of mine means to them, my heart flutters. Every dollar you may ever have spent to go to one of my shows or purchase my merchandise literally went back into improving my craft, recording more songs, buying another tank of gas on tour, and making more music for you.

I thought now was the right time to open up and share my personal story with you, because I think you deserve to know that part of the impetus that keeps me onstage and in the studio is honoring my brother. In all honesty, I never thought I would be a performer (stage fright!) or get to do the amazing things I have done. When I think back on the faraway and seemingly impossible dreams I had as a little girl, I realize I am to a large degree, living that dream. Every little success I have gives me the satisfaction of knowing it would have brought a smile to Scott’s face. And with my latest record, I plan to invest as much time and energy as possible into getting my music out there, reaching more people, taking Scott with me just a little further on down this road.

Thank you so much for being on this journey with me. If you took the time to read this, you have already given me a wonderful gift.

Love,
The Hilary Scott “with one L”.